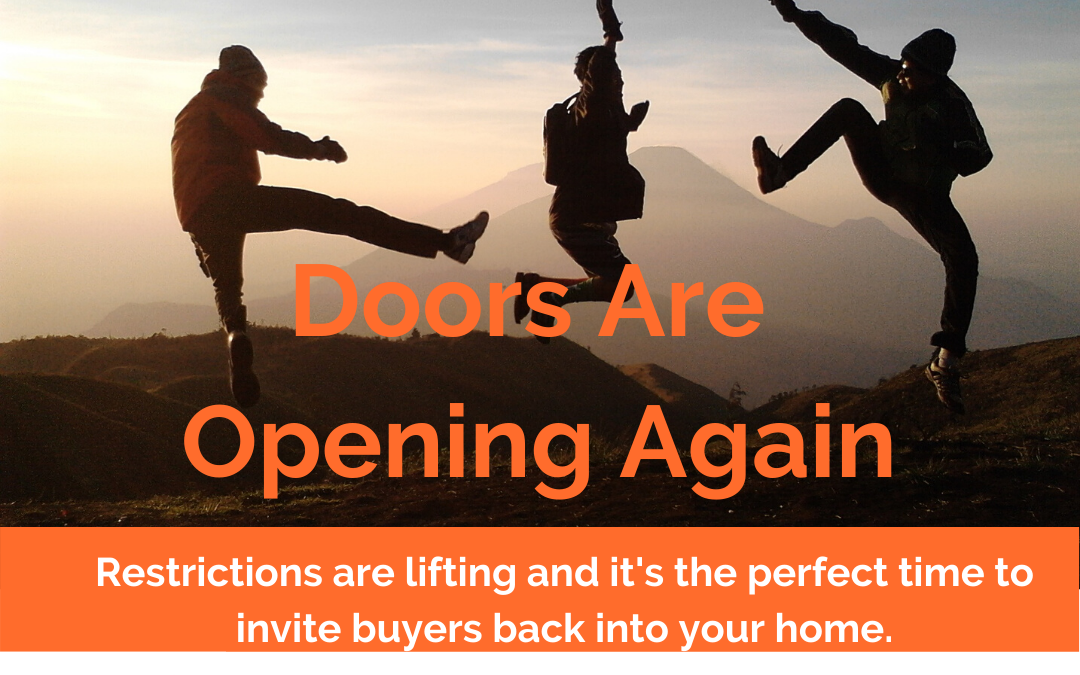 If you are someone who wants to “time the market” the time is probably right now!

As we start the month of June, Hawaii is beginning to very slowly and cautiously wake up from the events the last few months. Starting on June 1st, restaurants have been allowed to open, many businesses have been allowed to open, and even real estate open houses are once again allowed. The governor has announced that starting June 16th inter-island travel will be allowed again without a quarantine. State and County beaches are now open for all normal beach activities.

As I drive through town there is definitely a little bit more activity and a few more cars on the road than we have seen in the last few months. By no means is this anywhere near where things were just a few months ago. There is a noticeable lull in all activities that I can see. Many people locally have been deeply impacted by the shutdown of the Hawaii tourism economy. Hawaii has suffered the highest rate of unemployment in the nation.

In my opinion, until Hawaii is open to tourists from the mainland without quarantine, we will not see significant changes in our economy. Without tourism Hawaii operates on a negative trade imbalance. The cost of running our state in the middle of the ocean is pretty high which means the money here leaves Hawaii. In order to correct this imbalance we have to bring dollars from the mainland and other countries into Hawaii. As of now, the only way this happens in any sort of scale on Hawaii Island is through tourism. That may change in the future, but I have yet to see any ideas which would have a significant impact on our trade imbalance.

As of June 7th, there is no date set to open Hawaii to tourists without a quarantine. The rumor is that we may have a date sometime between mid July and mid August for Hawaii to be open for tourists, as long as there is the ability to have tests either a few days before departure or immediately upon arrival. Some people in state government are floating the idea of opening Hawaii only to a few countries such as Japan and New Zealand but not to the mainland United States. I expect some push back on that. In any case, we have a good month or so to see what happens in other tourist areas which have reopened. I’m keeping a close eye on what happens in Las Vegas. if we see a spike in cases related to the reopening in Las Vegas I expect that will delay things in Hawaii quite a bit.

The data is in for the month of May and looking back the numbers are right about where we expected. While we do not see significant price movement at this time, all of the units sold decreased by very significant percentages. As you might imagine there were very few contracts being written at the end of March or through the month of April and those are the contracts that would be recorded as sales in the month of May. Each of the four market segments we track saw units sold decreased by Between about 50 and 80%.

I wonder how will Covid impact real estate and the way people live in their homes moving forward?  I remember back to post 9/11,when some people, like myself, took long-term goals and accelerated them quickly. Might we see other people who had a dream of coming to Hawaii someday decide to make the move now? Might people want to be away from densely populated urban areas in order to purchase acreage?  Will we see more people invest in their home?  These are some of the things that I’m thinking about with real estate.  I’m curious as to what you guys think might change-

I think we’ve done a good job covering all the bad news so now let me leave you with a few glimmers of Hope. In the last week and a half I have seen a noticeable uptick in buyer activity here on the island. This correlates with a short delay from what has been an increase in buyer activity on the mainland. While I think our recovery will be more delayed and less robust than the mainland, I do believe we have turned a bit of a corner.  We can see in the chart below that mainland real estate showings are back where they were 1 year ago. 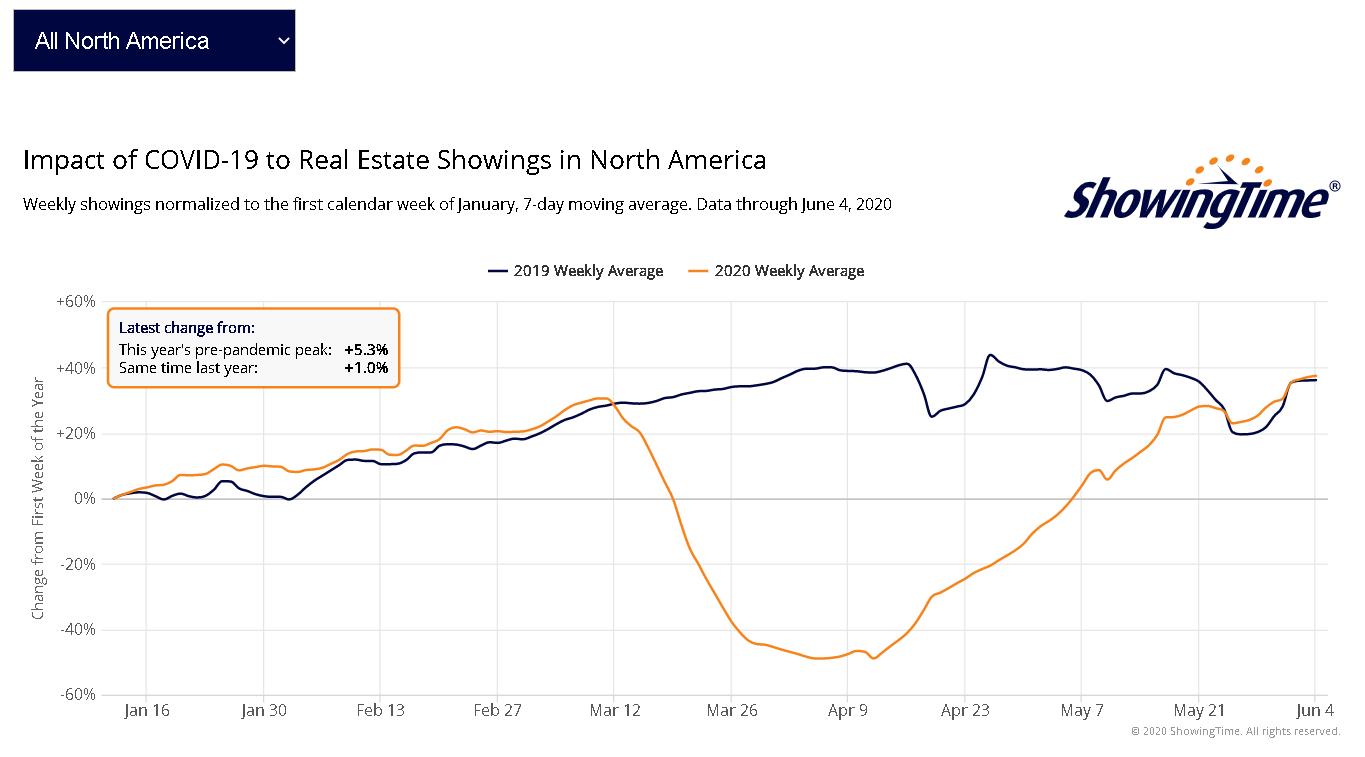 This graph shows the average weekly showings of 2019 compared to this year’s weekly average showings. I will keep an eye on the trajectory of the 2020 line (orange) but we’re 5.3% above this year’s pre-pandemic number of showings. That’s 5% ABOVE the pre-pandemic PEAK.

I think it might be time to stop talking about V shaped recovery (for buyer demand, not the economy as a whole) and start having the “pent up demand” discussion.

Buyers mostly buy because of timing in their life, not timing in the market. If you are a “market timer”, understand that this market looks poised to make a move. 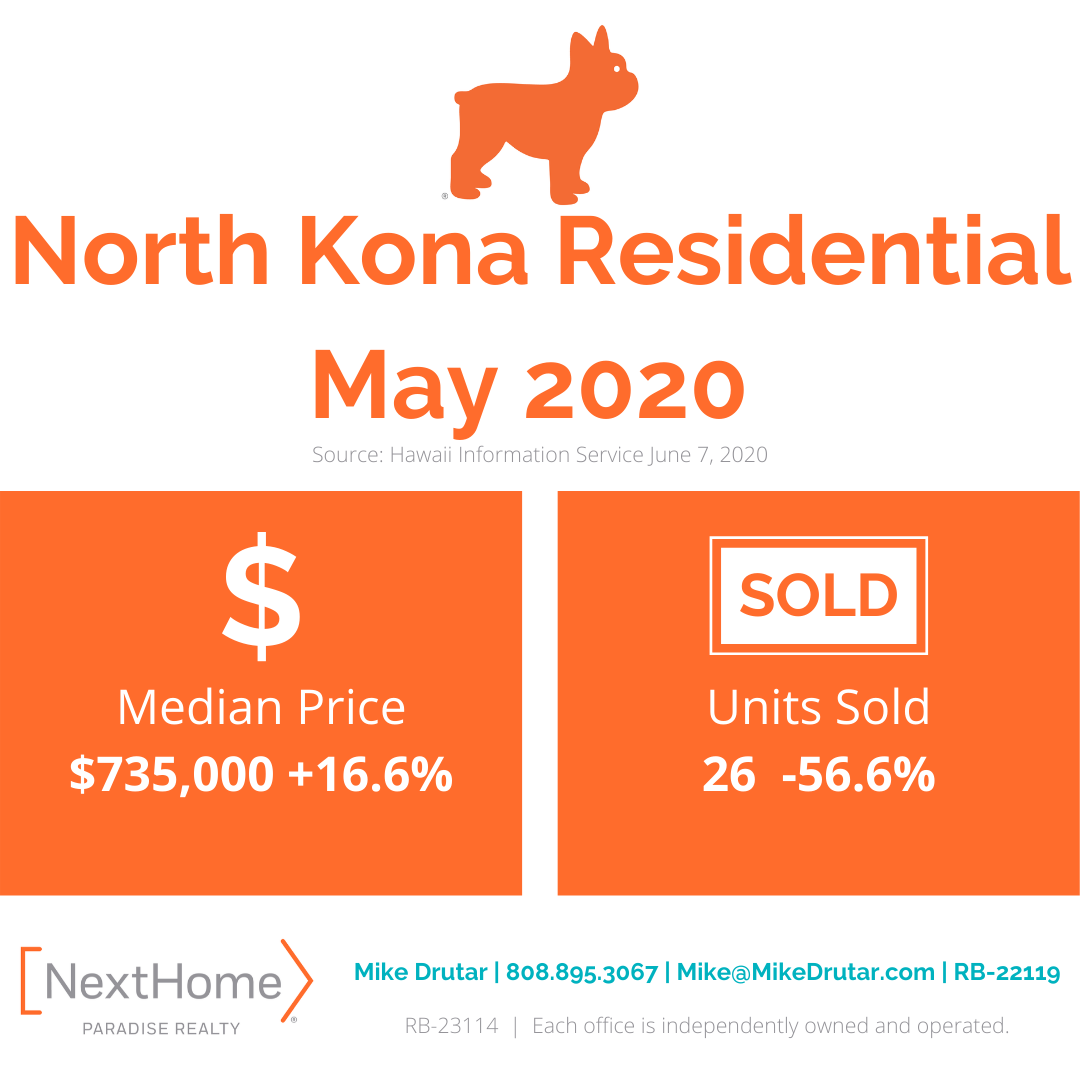 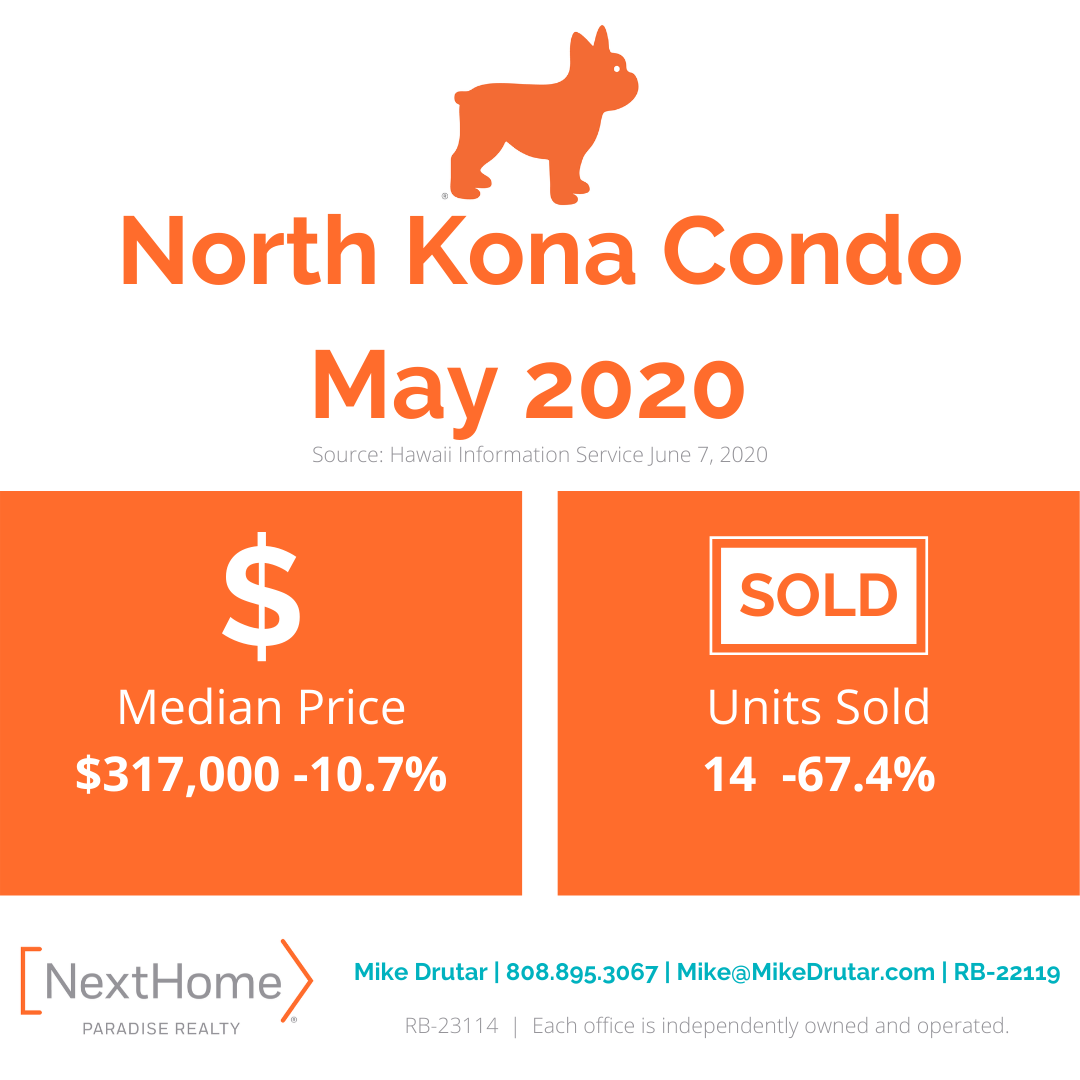 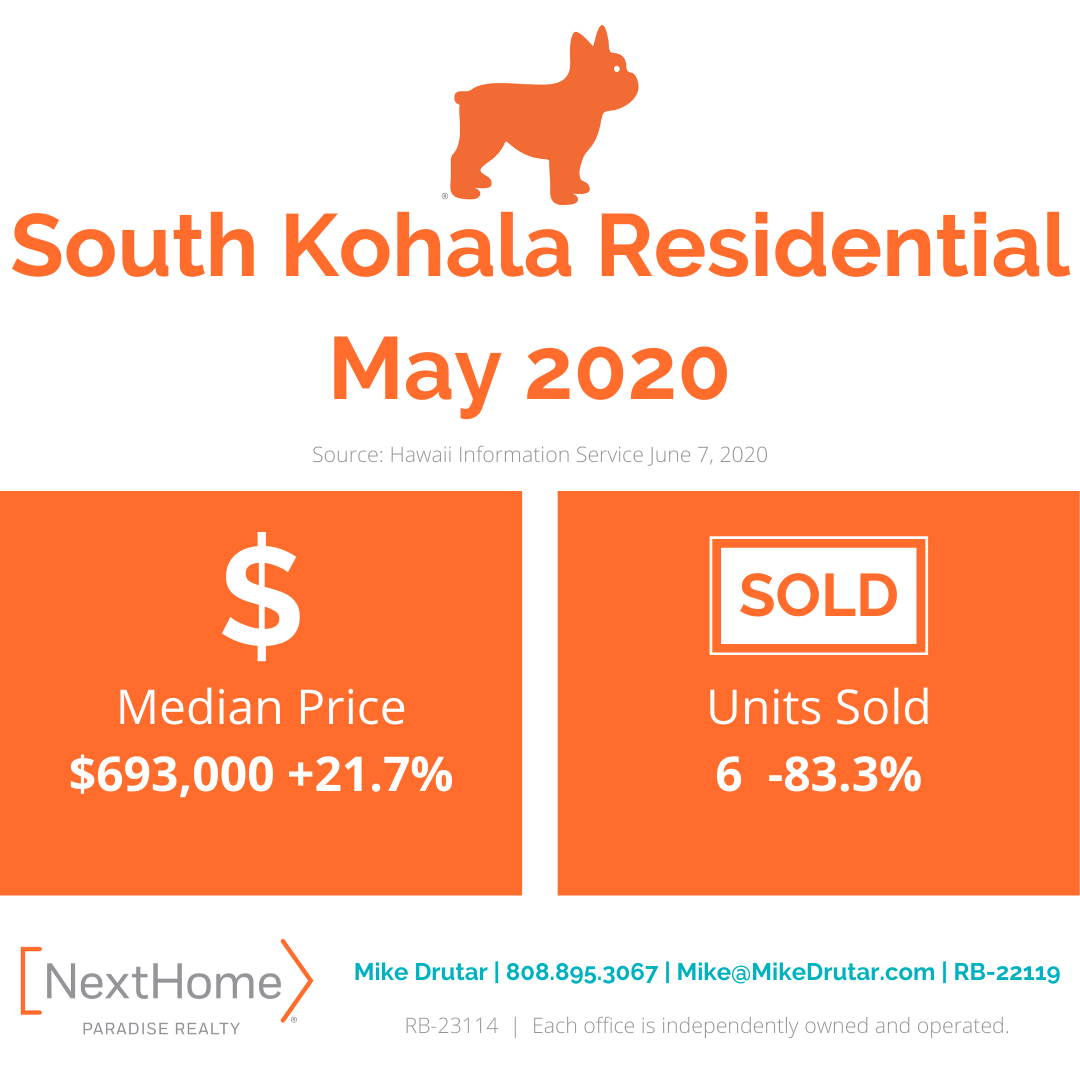 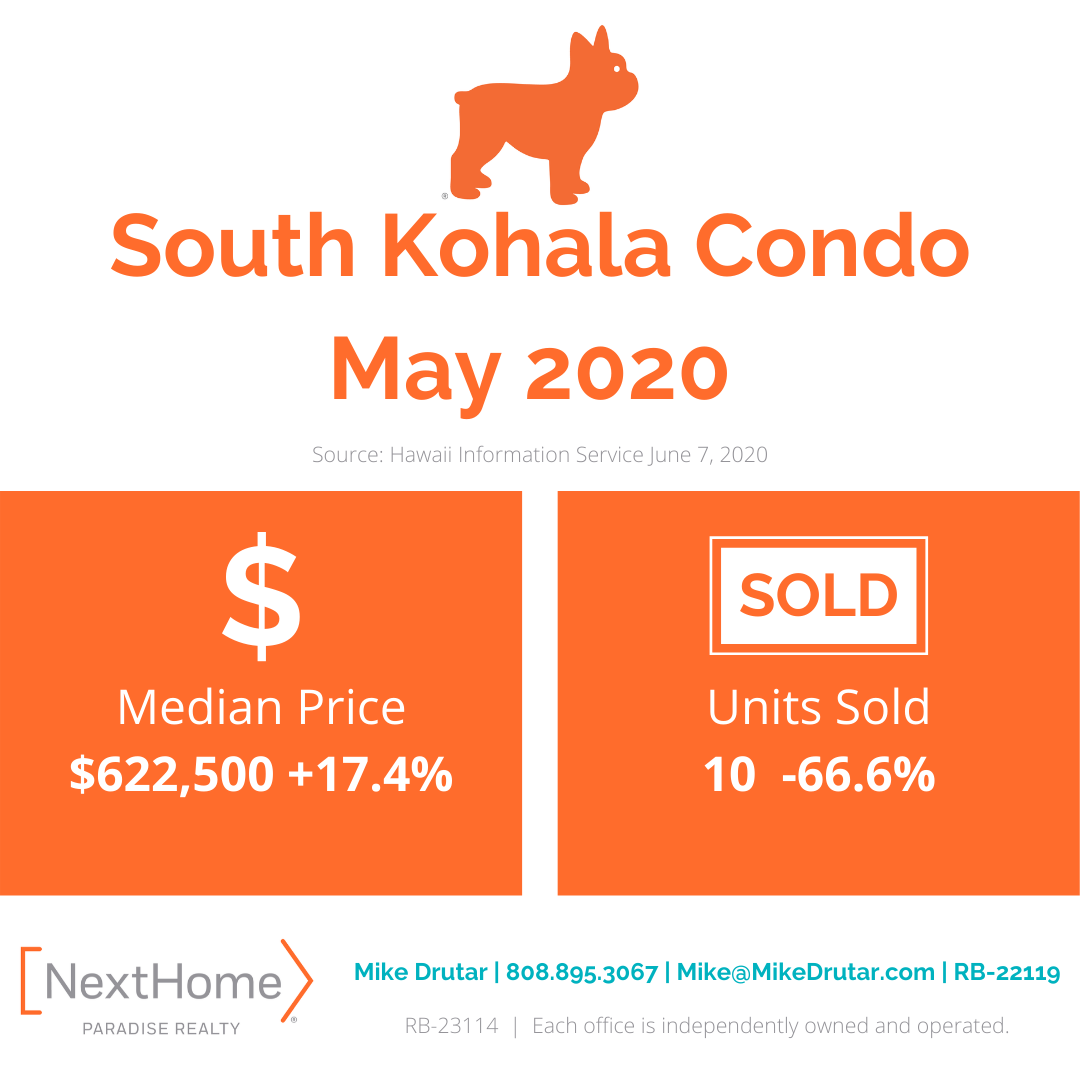 What About Current Market Conditions

Let’s look at three different measurements for both the residential and condo market under $1M.

This brings us to our current inventory. Right now our residential inventory in this market is 5.3 months for residential, up from 3.0 last month.  Condo inventory is 11.5 months up from 6.5 months.  For perspective those numbers were 2.3 for residential and 3.4 for condos before Covid.

Mike Drutar is the Principal Broker and Owner of NextHome Paradise Realty, located on the Big Island of Hawaii.